Above are the students who competed in the Southern Open National Martial Arts Championship, Columbus, GA 6 October 2012 All winners with 4 1st, 2 2nd, 3 3rd and a 4th place

Above are the Jacobi’s both rated number one in the State of Alabama under the AKC, October 6, 2012 with all 1st place

The students from Conleyâs Academy have three more large tournaments this year to compete in: The US Open on 13 and 14 July 2012, In Orlando, FL. The Sunshine Classic in Panama City, Fl on 11 August, 2012 and the Southern Region Open karate Tournament in Dothan, AL November 3rd at the Dothan Civic Center. 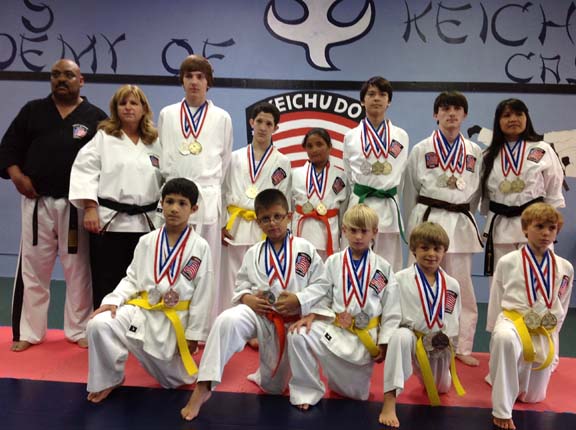 30th Annual Karate Tournament for Youth Sports Foundation in Tallahassee, FL on 26 May 2012.

Students at Conleyâs Academy of Keichu-Do start the year off big at the 9th Annual Northwest Floridaâs Spring Martial Arts Championship in Crestview, FL on March 10th, 2012. Students from Conleyâs Academy competed in the following four different karate categories: Musical Kata, Open hand Kata- which is the performance of prearranged karate techniques, Fighting- light contact made between two opponents for effective and controlled punches and kicks, and weapons- arranged fighting moves using traditional weapons. Shihon Dai Conley was very pleased with the results of his students. A total of 20 trophies were brought home by the students; with ten 1st place trophies, seven 2nd place trophies, and 3 3rd place trophies.